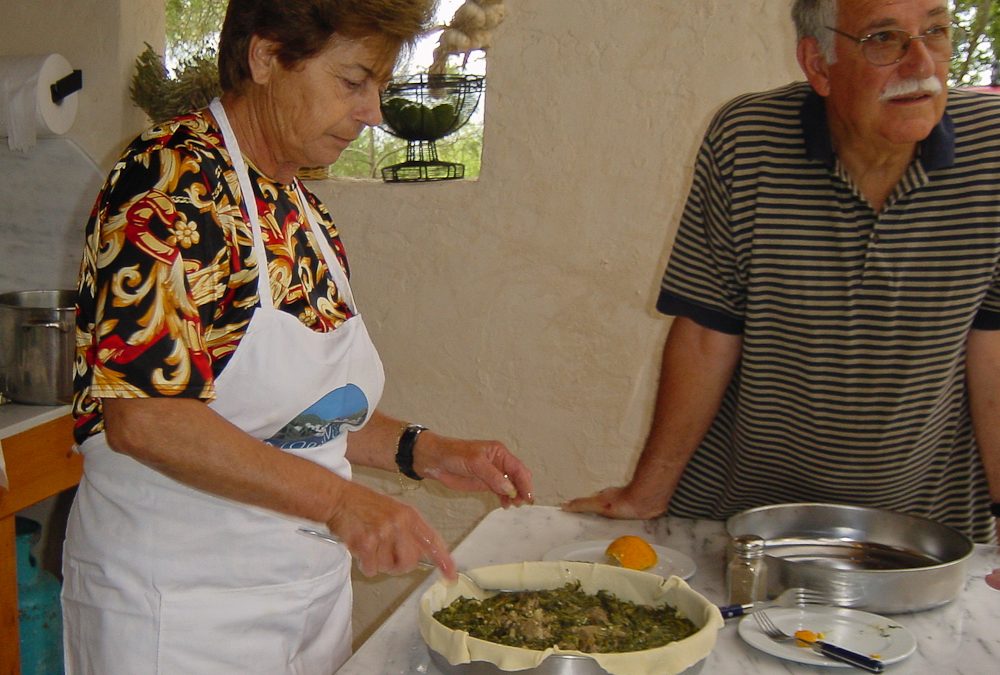 Maria, highly respected island cook and cooking teacher, Zakynthos, Greece, prepares her Hortopita for the oven in the photo above.

Posted by: our friend, Sotiris Kitrilakis, advocate for the best of traditional Greek foods, island resident and farming enthusiast

The hot sunny days of summer, the crowded beaches, and a multitude of tourists become fading memories by the beginning of November on the island of Zakynthos. The wine grapes have been harvested and the Zante currants have been collected from the drying flats some time ago. The olive harvest is in full swing and so is the rainy season. A carpet of weeds covered the dry, parched earth soon after the first rains. The sheep and goats are not the only ones delighted with the lush new growth. People are also foraging for their favorite weeds known as horta all over Greece. (You’ll recognize the word in the term horticulture).

When I moved to the island a dozen years ago I soon discovered the gift of the first rains, “the wild greens”, euphemism for weeds, at our friend Maria’s table. I went along on the next horta gathering trip. Armed with a short, sharp knife and toting a big plastic bag we walked into the hills behind the village. I soon learned to recognize the dozen or so weeds we were after. It turns out that most of them are varieties of dandelions (cichorium), endives are a domesticated version. Maria was very amused when I told her of the never-ending efforts expended in U.S. suburbia to eliminate them from manicured lawns. “Why don’t you just eat them?”, she said. In addition to the prolific dandelions we collected tender young mustard greens, wild fennel, wild garlic and leeks and a very aromatic parsley-like plant called caucaljda. In less than half an hour we had more than enough for a couple of meals.

The mix of weeds changes over the rainy months as new varieties replace earlier ones gone to seed. Many of the more aromatic plants come along in January and February. The flavor and the texture keeps changing.

The most common preparation is to simply boil the greens for 5 to 10 minutes until they are just tender and to serve them warm with plenty of lemon juice and olive oil. This is the season for the first ripening of lemons and newly pressed olive oil so the timing is perfect. It is impossible to describe the complexity of flavors that comes from the bitter greens and the sharpness of the young oil and the aromas of just picked lemons.

But my favorite dish is the pie, pita, made with a filling of stir-fried horta and feta cheese. It is a winter favorite and, as you can imagine, every pie is different reflecting the weeds used in the filling.

The following is Maria’s recipe based on my observations in her kitchen, she never measures, “she just knows” how much.

For the shell, the country phyllo:

Combine the flour and salt in a bowl making a well in the center. Add the water, oil and lemon juice and mix to form a soft dough. Knead the dough for about 10 minutes, cover it with a tea towel and let it rest for at least an hour.

Heat the oil in a pan and sauté the onions taking care not to brown. Add the greens and stir-fry until wilted, 7 to 10 minutes. Set aside and let cool. Crumble the feta and add to the greens, mix well.

Preheat the oven to 375 degrees Fahrenheit.

Shape the dough in to a ball and in two. Sprinkle a small amount of flour on your work surface and roll out one half into a 16-inch round. Brush olive oil on the pan and spread the phyllo round on the bottom. Place the filling in the pan.

Roll out the second portion of the dough, place it on top of the pan and pinch the edges together. Brush the top surface with olive oil and prick with a fork to allow venting.

Bake for 45 minutes to one hour. The top surface should be golden brown. Allow the pie to cool for at least 15 minutes before attempting to cut and serve.

When we read Sotiri’s evocative copy regarding the gathering and preparation of wild greens we were intrigued to learn the derivation of the English word “horticulture”. We replied to his posting. He indulged us with more research. It all started with the Greek “horto/horta” thousands of years ago.

The word “Horta” is derived from the word “Hortos” used in an early version of the Greek language about 4,000 years ago. It meant an enclosed place of land usually used to grow things. It evolved from the earlier, about 5,000 years ago, Indo-European language term “Ghortos” which also mean an enclosed place intended to grow things. The term found its way into other Indo-European languages, “hortus” in Latin, “gortum” in Frygian (Anatolia, now Turkey), “garten” in German, “jardin” in French and, of course, “garden” in English. It was also a precursor for “court”, another enclosed space.

In Greek what grew in a “hortos” is “horta”. In modern Greek “horta” is in use meaning greens/vegetables, but not “hortos”. They also make the distinction calling the “horta” gathered in the wild “wild greens”.

The term must have originated at the time that the hunter-gatherers turned into farmers and had to protect their crops from animals and perhaps the neighbors.