One of the first signs of Spring’s awakening at Nana Cardoon is rhubarb. An herbaceous perennial vegetable native to Siberia it makes its appearance in the early months of the year, typically March. 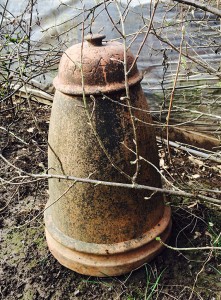 We “force” our rhubarb, that is we place an earthen pot called a cloche (reminiscent of the closely fitting woman’s hat) over the barely emerging plant. Our cloches are from England where there is a long standing culture, even celebration of forced rhubarb. The Rhubarb Triangle including the towns of Wakefield, Leeds and Morley are home to several events. wikipedia.org/wiki/rhubarb-triangle has a fun and fascinating posting titled, “History, Cultivation and Culture”.

The function of the cloche can be improvised with a large terra cotta pot and a stone or piece of broken pot to cover the hole. Not as pretty but does the job!

Even in the closed environment of the cloche, the soil is warmed, the plant

grows tall and tender as it reaches for the light. Once the leaves reach the top of the cloche the pot is removed to reveal the most amazing array of colors depending upon the variety, combinations of “hot” lime green, rosy red and pink. Richard prefers to use a mixture of red and green stalk varieties. The red stalk varieties are flavorful, yet mild, while the green stalk varieties have a more complex flavor for the pie. 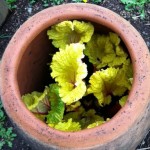 It’s become an annual event here: friends gather for the unveiling. We herald with a hearty “Da! Da! Da! Dat! Da!”, followed by exclamations of joy as the colors are revealed.

Each fall our plants are given a one-inch dose of compost and mulched with several inches of decaying leaves. A caution is in order. The leaves are high in oxalic acid, therefore somewhat toxic and not to be eaten. 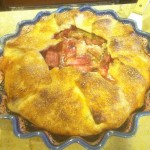 We always make something special from these beautiful stalks (petioles). Recipes, both sweet and savory abound. Above is a picture of one of Richard’s famous pies. There is always a secret ingredient, an intriguing accent: crystalized ginger in rhubarb, almond extract in cherry, freshly cracked pepper in strawberry, aged balsamic in apple. We cannot tell you any of the others, or we’d be revealing all his secrets!

We follow British chef and food activist Hugh Fearnley-Wittingstall, www.rivercottage.net and use his recipes quite often. Here’s a recipe from The Guardian, ” Pretty in Pink: Hugh Fearnley-Wittingstall New Season Forced Rhubarb Recipes”. The recipes range from savory to sweet. We chose the rhubarb and rosewater to illustrate the beauty of simplicity, just enough sugar to lift the rhubarb and enough drops of rosewater to enhance the floral notes. It only needs a shortbread cookie to accompany.

Slice rhubarb into pieces and place in a baking dish with just the water that clings to it after washing, and toss with sugar. Cover with foil and bake for 30-40 minutes, until tender. Cool completely then gently stir in the rosewater, starting with just 1/2 teaspoon, adding a little more at a time until you have the depth of flavor that suits you. Serve with your favorite shortbread cookie.

Rosewater brings out the slightly floral quality of new season forced rhubarb, but if that isn’t your think, use orange flower water or a few drops of best-quality vanilla extract.